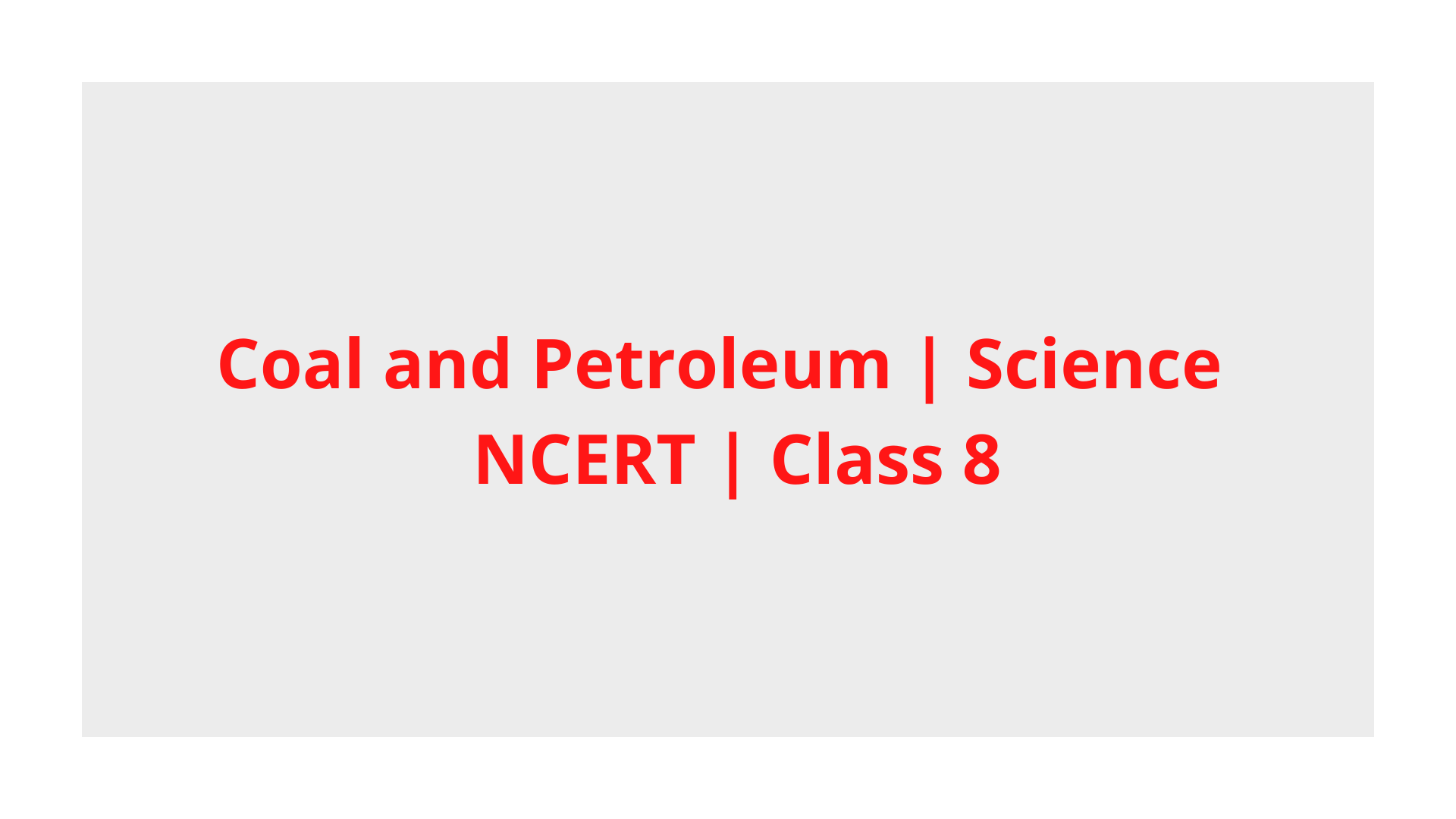 Hello students, in this blog you can find important summary notes from the Chapter 5, Science , NCERT Book of Class 8. These notes can be used for preparation of various school Competitive Exams, Olympiads and also developing Fundamentals.

1. Natural Resources : Resources like air, water, soil and minerals that are obtained from nature, they are called natural resources.

3. Inexhaustible Natural Resources: The resources that are present in unlimited quantity in nature and are not likely to be exhausted by human activities.
Examples : sunlight, air.

4. Exhaustible Natural Resources: The amount of these resources in nature is limited and can be exhausted by human activities.
Examples : forests, wildlife, minerals, coal, petroleum, natural gas etc.

5. Fossil fuels: These are fuels formed from the dead remains of living organisms (fossils). Example: coal

6. Uses of Coal :
– Used to cook food.
– Was used in railway engines to produce steam to run the engine.
– Used in thermal power plants to produce electricity.
– Also used as a fuel in various industries.

7. Under high pressure and high temperature, dead plants got slowly converted to coal.

8. Carbonisation : It is the slow process of conversion of dead vegetation into coal.

9. Coal is processed in industry to get some useful products such as coke, coal tar and coal gas.

10. Coke :
– It is a tough, porous and black substance.
– It is an almost pure form of carbon.
– Used in the manufacture of steel
– Used in the extraction of many metals.

11. Coal Tar :
– It is a black, thick liquid with an unpleasant smell.
– It is a mixture of about 200 substances. – Used as starting materials for manufacturing synthetic dyes, drugs, explosives, perfumes, plastics, paints, photographic materials, roofing materials, etc.
– Naphthalene balls made from coal tar are used to repel moths and other insects.

12. Bitumen, a petroleum product, is used in place of coal-tar for metalling the roads.

13. Coal Gas:
– Obtained during the processing of coal to get coke.
– Used as a fuel in many industries situated near the coal processing plants.
– Earlier, was used for street lighting, while now a days, used as a source of heat.

– Petrol and diesel are obtained from a natural resource called petroleum.

– Petroleum was formed from organisms living in the sea.

– As these organisms died, their bodies settled at the bottom of the sea and got covered with layers of sand and clay.

– Over millions of years, absence of air, high temperature and high pressure transformed the dead organisms into petroleum and natural gas.

– The world’s first oil well was drilled in Pennsylvania, USA, in 1859.

– In India, oil is found in Assam, Gujarat, Mumbai High and in the river basins of Godavari and Krishna.

– Petrochemicals : Many useful substances are obtained from petroleum and natural gas and are termed as petrochemicals.

– Petrochemicals are used in the manufacture of detergents, fibres (polyester, nylon, acrylic etc.), polythene and other man-made plastics.

– Hydrogen gas obtained from natural gas, is used in the production of fertilisers (urea).

– Due to its great commercial importance, petroleum is also called black gold.

15. Natural Gas : Natural gas is a very important fossil fuel because it is easy to transport through pipes.

– CNG is used for power generation.

– Now a days CNG is used as a fuel for transport vehicles because it is less polluting. It is a cleaner fuel.

– The great advantage of CNG is that it can be used directly for burning in homes and factories where it can be supplied through
pipes.

– CNG network of pipelines exists in Vadodara (Gujarat), some parts of Delhi and other places.

– CNG is used as a starting material for the manufacture of a number of chemicals and fertilisers.

– In India, natural gas has been found in Tripura, Rajasthan, Maharashtra and in the Krishna Godavari delta.

16. Burning of fossil fuels is a major cause of air pollution.

• Use of fossil fuels is also linked to global warming.

• In India, the Petroleum Conservation Research Association (PCRA) advises people how to save petrol/diesel while driving. Their tips are:
– drive at a constant and moderate speed as far as possible
– switch off the engine at traffic lights or at a place where you have to wait
– ensure correct tyre pressure.
– ensure regular maintenance of the vehicle.