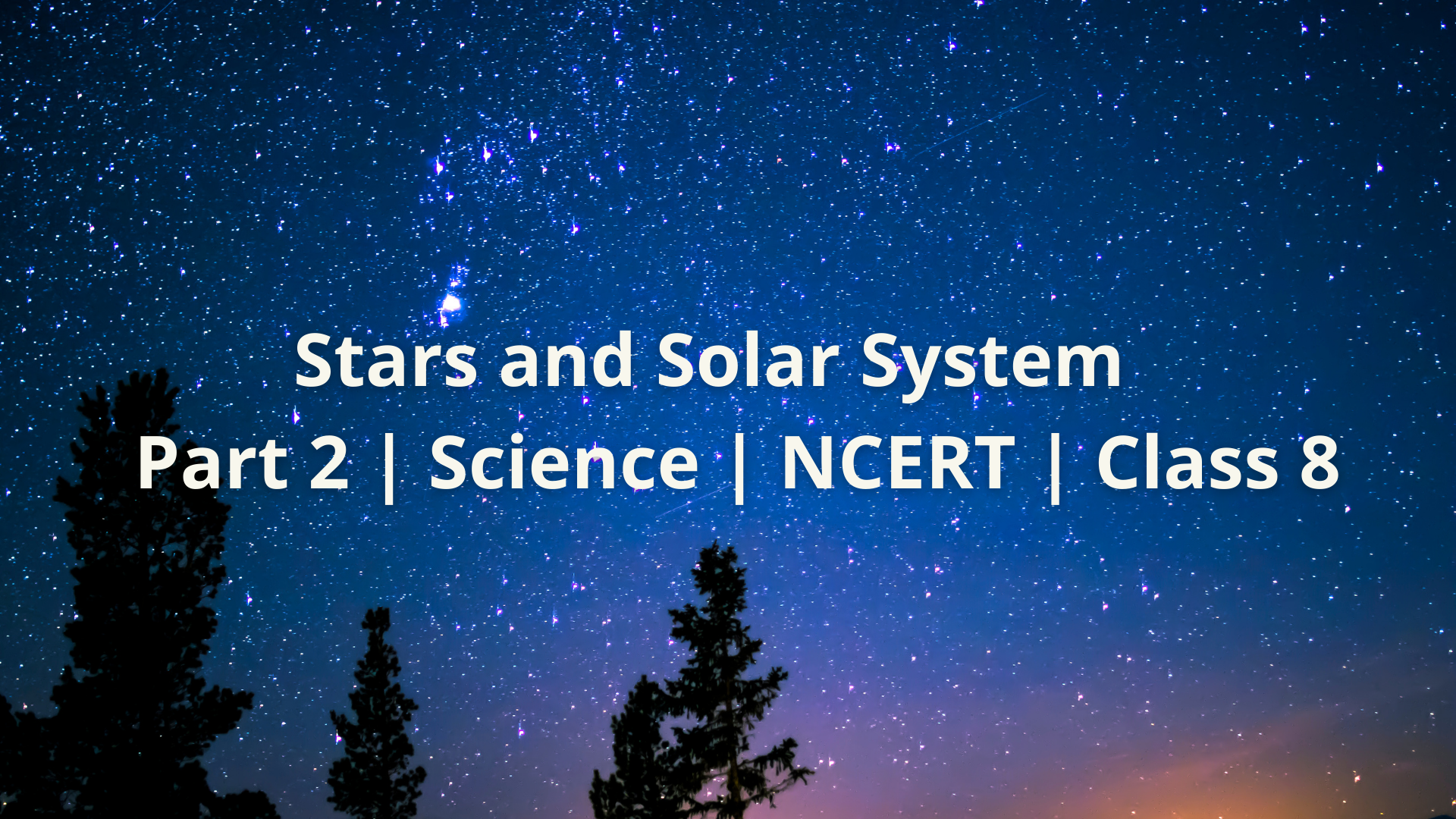 Hello students, in this blog you can find important summary notes from the Chapter 17, Stars and Solar System, Science , NCERT Book of Class 8. These notes can be used for preparation of various school Competitive Exams, Olympiads and also developing strong Fundamentals.

39. The Sun and the celestial bodies which revolve around it form the solar system.

40. Solar System consists of large number of bodies such as planets, comets, asteroids and meteors.

41. The gravitational attraction between the Sun and these objects keeps them revolving around it.

42. The eight planets in their order of distance from the Sun are:

43. Pluto was the farthest planet from the Sun. Pluto does not fit in the definition of a planet and therefore no longer a planet of the solar system.

45. The Planets
– The planets look like stars, but they do not have light of their own. They merely reflect the sunlight that falls on them.
– The simplest method of identifying planets from stars is that stars twinkle, whereas planets do not.
– Also the planets keep changing their positions with respect to the stars.
– A planet has a definite path in which it revolves around the Sun. This path is called an orbit.
– The time taken by a planet to complete one revolution is called its period of revolution.
– The period of revolution increases as the distance of the planet increases from the sun.
– Besides revolving around the Sun, a planet also rotates on its own axis like a top.
– The time taken by a planet to complete one rotation is called its period of rotation.
– Any celestial body revolving around another celestial body is called its satellite.
– We use the term satellite for the bodies revolving around planets. Moon is a satellite of the Earth.
– There are many man-made satellites revolving round the Earth. These are called artificial satellites.
– When the shadow of the Earth falls on the moon, it causes lunar eclipse.
– When the shadow of the moon falls on the Earth, it causes solar eclipse.

– Mercury :
∗ The planet mercury is nearest to the Sun.
∗ It is the smallest planet of our solar system.
∗ Because Mercury is very close to the Sun, it is very difficult to observe it, as most of the time it is hidden in the glare of the Sun.
∗ However, it can be observed just before sunrise or just after sunset, near the horizon.
∗ So it is visible only at places where trees or buildings do not obstruct the view of the horizon.
∗ Mercury has no satellite of its own.

– Venus
∗ Venus is earth’s nearest planetary neighbour.
∗ It is the brightest planet in the night sky.
∗ Sometimes Venus appears in the eastern sky before sunrise. Sometimes it appears in the western sky just after sunset.
Therefore it is often called a morning or an evening star, although it is not a star.
∗ Venus has no moon or satellite of its own.
∗ Rotation of Venus on its axis is somewhat unusual. It rotates from east to west while the Earth rotates from west to east.
∗ On Venus, the Sun would rise in the west and set in the east.
∗ Venus shows phases just like the moon.

– Earth:
∗ The Earth is the only planet in the solar system on which life is known to exist.
∗ Some special environmental conditions are responsible for the existence and continuation of life on the Earth.
∗ These include just the right distance from the Sun, so that it has the right temperature range, the presence of water and suitable atmosphere and a blanket of ozone.
∗ From space, the Earth appears blue–green due to the reflection of light from water and landmass on its surface.
∗ The axis of rotation of the Earth is not perpendicular to the plane of its orbit.
∗ The tilt is responsible for the change of seasons on the Earth.
∗ The Earth has only one moon.

– Mars :
∗ The next planet, the first outside the orbit of the Earth is Mars.
∗ It appears slightly reddish and, therefore, it is also called the red planet.
∗ Mars has two small natural satellites.
– Indian Space Research Organisation (ISRO) launched India’s first Mars orbiter mission – Mangalyaan, on November 5, 2013.

– Jupiter :
∗ Jupiter is the largest planet of the solar system.
∗ It is so large that about 1300 earths can be placed inside this giant planet.
∗ The mass of Jupiter is about 318 times that of our Earth.
∗ It rotates very rapidly on its axis.
∗ Jupiter has a large number of satellites.
∗ It also has faint rings around it.
∗ You can easily recognise Jupiter as it appears quite bright in the sky.
∗ If you observe it with the help of a telescope, you can also see four of its large moons.

– Saturn
∗ Beyond Jupiter is Saturn which appears yellowish in colour.
∗ It is unique in the solar system because of its beautiful rings.
∗ Saturn also has a large number of satellites.
∗ It is the least dense among all the planets. Its density is less than that of water.

– Uranus and Neptune
∗ These are the outermost planets of the solar system.
∗ They can be seen only with the help of large telescopes.
∗ Like Venus, Uranus also rotates from east to west. The most remarkable feature of Uranus is that it has highly tilted rotational axis.
∗ As a result, in its orbital motion it appears to roll on its side.

48. There are some other bodies which revolve around the Sun. They are also members of the solar system.

– Asteroids
∗ There is a large gap in between the orbits of Mars and Jupiter. This gap is occupied by a large number of small objects that
revolve around the Sun called asteroids .
∗ Asteroids can only be seen through large telescopes.

– Comets
∗ Comets are also members of our solar system. They revolve around the Sun in highly elliptical orbits.
∗ Their period of revolution round the Sun is usually very long.
∗ A Comet appears generally as a bright head with a long tail.
∗ The length of the tail grows in size as it approaches the sun.
∗ The tail of a comet is always directed away from the sun.
∗ Many comets are known to appear periodically. One such comet is Halley’s comet, which appears after nearly every
76 years.

– Meteors and Meteorites
∗ At night, when the sky is clear and the moon is not there, you may sometimes see bright streaks of light in the sky. These are commonly known as shooting stars, although they are not stars. They are called meteors.
∗ A meteor is usually a small object that occasionally enters the earth’s atmosphere.
∗ At that time it has a very high speed. The friction due to the atmosphere heats it up.
∗ It glows and evaporates quickly. That is why the bright steak lasts for a very short time.
meteors are large and so they can reach the Earth before they evaporate completely. The body that reaches the Earth is called a meteorite.
∗ When the Earth crosses the tail of a comet, swarms of meteors are seen. These are known as meteor showers.